What are “weak forms” in spoken English?

As you probably know English is a stress-timed language.   But what does that actually mean?

OK — but what does that actually mean?   What do “weak forms” sound like?

These words are usually UNSTRESSED words in a sentence, they are the grammatical words that we say quickly and all native speakers use the weak forms of these words.  It is important to recognise weak forms when you hear them in spoken English.    Weak forms are used across the whole of England.   They are used in both formal and informal spoken English.   They are used in all different regional accents and they are used by all different classes from football fans to Royalty.

Can  you write down exactly what Max says in this section?

Hello everyone and welcome back to match day with Max.  I’m here at Wembley …..

Listen again and notice how he says    AND.

Listen again and notice how he pronounces the word TO.

TO is another word that is usually pronounced in the weak form by native speakers.    When TO is an unstressed word in a sentence the vowel sound changes to the lazy weak schwa sound  / ə /   So Max says:     Welcome back tə match day with Max.

Listen to this next clip and again listen out for the words AND  and TO.

Let’s go and talk to the fans.

Notice how AND   sounds here.      Can you hear the D at the end of AND?     The D is not pronounced as the word AND is unstressed and weak.   The vowel sound is replaced by the schwa sound.

Notice how TO sounds here.   Again TO is pronounced in the weak form and the vowel is replaced by the schwa sound.

It is important to know that weak forms are used by ALL native speakers even those in the small minority group of society who speak the Queens’ English and use Received Pronunciation.

Listen to how Harry says the words  TO and AND.

Ermm yes,  I’m very excited to announce that Megan and myself had a baby boy.

There are around 35 words which have both a strong and a weak form of pronunciation.

Do you want to know more about these words?    There are lots more videos and examples of weak forms on my blog. 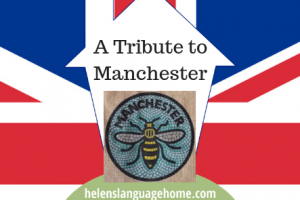 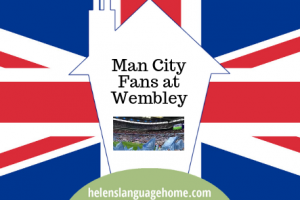