How to improve your listening skills.

Find resources to listen to that have transcripts.    (I provide a lot of these for different regional accents.  If there is a particular English accent you want to listen to, then get in touch and let me know.)     It is useful if you know what the audio is about before you start listening.  Knowing the context will help you understand the audio.  You will know what types of words or phrases to expect to hear.

Listen to it once all the way through without reading the transcript.   Yes, it will sound fast, don’t worry, it will get easier the more you listen to it.  The aim here is to listen all the way through and to try and understand the general theme of the audio.   Do not be tempted to stop and rewind and to look up words you don’t know.

Now listen to it in shorter sections.    Listen to each section numerous times WITHOUT reading the transcript.   Write down what you can hear.  Listen again, write down the sounds you can hear if you can’t hear individual words. What does it sound like?   You need to really focus on intensive listening.  Listen to short sections, 30 seconds or so at a time.  Write down everything you can hear.  What does it sound like?   This will help you later to understand how native speakers connect words together, and how we miss sounds out when speaking.

When you get to the end, go back to the beginning and listen again.    Don’t worry if there are sections you do not understand.   This type of exercise gets easier to more of them you do.

Now open the transcript.   Now listen again to each section and read the transcript at the same time.  If there are sections you did not hear correctly compare the sounds that you wrote down with the transcript.   If you write in the comments which parts were difficult to hear and what sounds you heard instead then I will give you feedback and help.

If there are words and phrases you did not know you can now look them up.

Here is a short video featuring Toni Duggan who is an English football player and plays for Barcelona.  She is also a member of the English National Football team.

In this video, she is talking about how she started playing football,  what drives her and what her biggest fears are.

In spoken English, many grammatical function words are spoken with the weak form when those words are unstressed.  Notice how these words sound in this exercise.  The most common weak forms are words such as:

Toni Duggan is from Liverpool and in the Scouse accent the word my sounds like ME when it is weak.

I think my earliest football memory is going to watch my brothers play football. I’ve got an older brother and a younger brother and I always went along to watch them on a Saturday or a Sunday and I’d be kicking a ball at the side of the pitch, and yeah then I really got into it myself and found myself a local team.

0:20  I think from the moment I started kicking a ball, to be honest, I think that was when I fell in love with it.  Yeah my grandad’s been a massive part of my career from when I was younger right through ’till now and still is,  and he really likes to feel a part of it and he gets on with all the girls and everybody knows him in football and it’s really nice having him in the stands watching me.

0:44    I think the most difficult period for me was when I was younger and women’s football wasn’t so popular and it was so difficult you know, I’m just a young little girl  enjoying playing football and people are telling me that women can’t play or girls can’t play and how I won’t make a career out of it and how bad we are at playing football and just to be sitting here now and to prove all those people wrong is a massive honour

01:08  I think my biggest drive is that, looking back to when I was younger and all the people telling me that it wasn’t possible for women to play football and to have achieved so much in my career already, to be sitting here in Barcelona and so proud to be playing for one of the biggest clubs in the world, if not the biggest and for everything that I’ve achieved with England and all the caps that I’ve got so far and there’s still many more to come hopefully ..yeah I think that’s my biggest drive to keep proving them people wrong and to keep making my family and especially my grandad proud.

01:37   Biggest fears will be at the end of my career and I think I’ve thought about it all the way along.  You hear so many players and ex-players saying how short your career is and it goes by so fast and it’s true. I still feel like I’m eighteen and I’m twenty-seven already so  ….  I know I’ve still got a long way to go in the game but I do think about that all the time.  What will I do after or how long I’ve got left…

02:00   I feel like I’ve achieved so much in the game I think the world cup bronze medal was a massive turning point for the team and how much we’ve achieved.  Signing for Barcelona was a massive achievement for myself.  I never thought I would play abroad, and  I didn’t even dream of playing for Barcelona because I didn’t think it would be possible, I didn’t know they had a women’s team.  So to be here now rubbing shoulders with the likes of Messi and Suárez and you know going to the same training ground facility and being able to walk down the road and go the Neu Camp every week is a massive achievement.

2.30   But I also think inspiring young girls out there and proving to people that women’s football is a great sport and you can make a career out of it…  that’s probably my proudest achievement.

2.44   Obviously it was a massive move coming over, especially coming abroad, but coming to a team like Barcelona is massive, as you say, you know,  there is not many people that I’ve done it in the past. And I’m not sure there might be in the future, it’s not something that English players do really go abroad and especially coming to Spain. But obviously the life here, I’m loving every minute, it’s an incredible journey.  Yea, I’m really enjoying it, I love winning. That’s why loosing’s the hardest.  In training in small sided games always you can’t beat that winning feeling.  And being around the team, being around the girls, you know the atmosphere, even though I’m here in Spain and they speak a different language but it’s still the same buzz that you get every day when you come into training, so yea I think I’ll miss it. 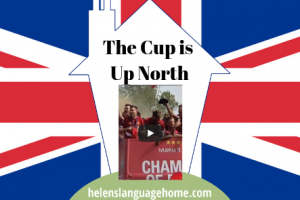 How to understand spoken English – Up North.

2 thoughts on “How to understand fast spoken English: the Liverpool accent – Listening Exercise.”